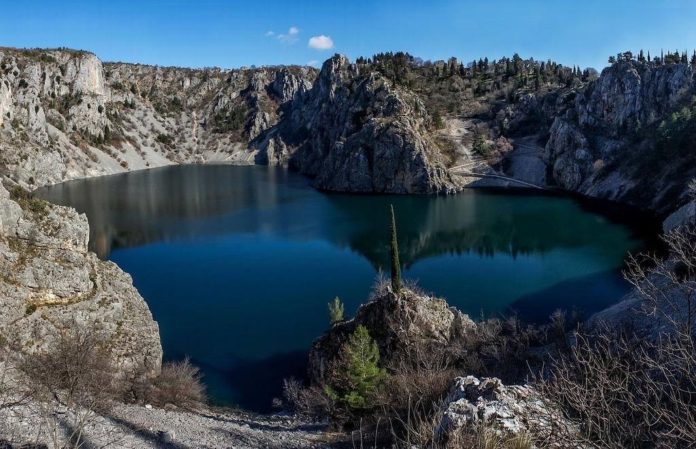 ALL NUANCES OF BLUE AND RED WATERS OF IMOTSKI

When George Bernard Shaw visited the Middle Dalmatia part of the Adriatic in 1929, he wrote: On the last day of Creation God desired to crown His work, and thus created the Kornati islands out of tears, stars and breath.
I have no doubt that he would has added Imotski Lakes in the Creation God.
Through his travel the world over to find the beautiful, bernard Show would certainly have been happy to share his notes of amazing lakes full of color nuances-perfect colors combinations.

At the very edge of the city of Imotski, the Red and the Blue lake have found their place. The two lakes represent a karst phenomenon and fall into the category of protected monuments of nature. Both lakes are named after the colour of the water; the red comes from the colour of the surrounding red rocks and the blue comes simply from the water colour (deep blue). Crveno jezero (the Red Lake), is the deepest Karst lake in Europe, and Modro jezero (the Blue Lake), a favourite bathing spot for the Imotski people, owes its name to its unique blue colour. This spring Blue Lake have changed its color- the milky light blue color as the result of rain and groundwater. If summer and spring make you think of vivid, intense colours while, Winter, on the other hand, is marked by darker of colour, has an impact on the way we perceive colour, identified unique as several different blue and red colours,

It lies in a deep, roughly circular sinkhole. The depth of the sinkhole is around 500 meters, with a width of 450 meters. The diameter of the lake is approximately 200 meters and the depth is 290 meters. Croatian Speleological Federation organized in 1998. an International speleodiving expedition, when they precisely measured height difference of 528 meters and the depth of the lake of even 287 meters, which was, according to some data, the deepest lake in Europe at the time. 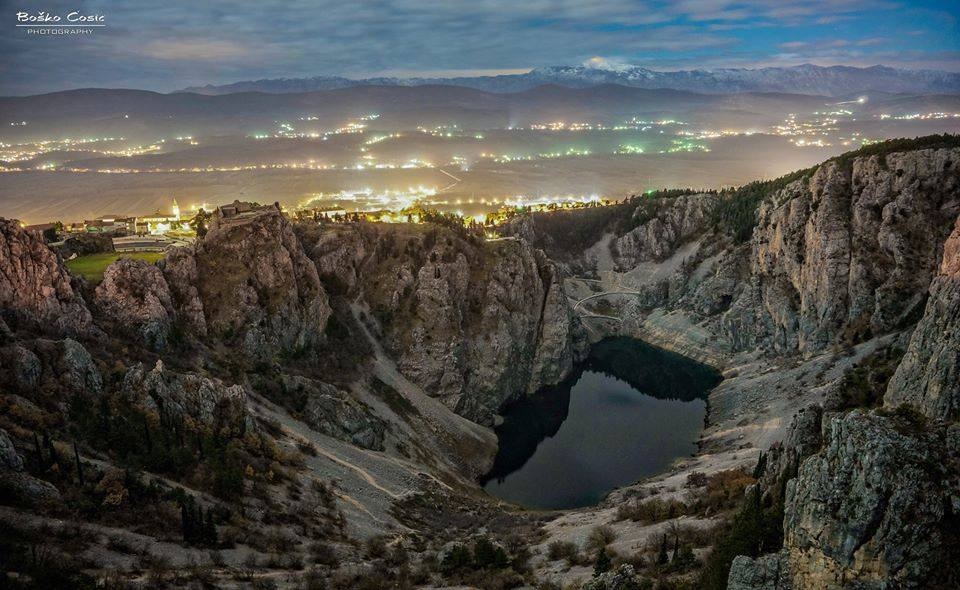 It is interesting that even today Red Lake depth has not been fully discovered yet. Until now, they have only discovered a cave of 280 m below the surface level. The lake has almost vertical cliff sides, so the lake is reachable only to those with the appropriate equipment: members of hiking and speleological societies. So, the lake can only be seen from a viewpoint by the road. The Red Lake never dries out. You can also try to throw a stone into the lake; it’s a common belief that it cannot be done. The scientist claim that the circulation above the lake is so strong that the stones go back among the rocks.
The legend says that if you can throw a stone in the Red Lake you will soon get married. Because of its surroundings and the depth of the sinkhole, it is very difficult to throw a stone in the lake, but the locals know the secret of how to make it hit the lake. The secret of marriage?
Red Lake is a treat an challange for expeditions and adventurers. 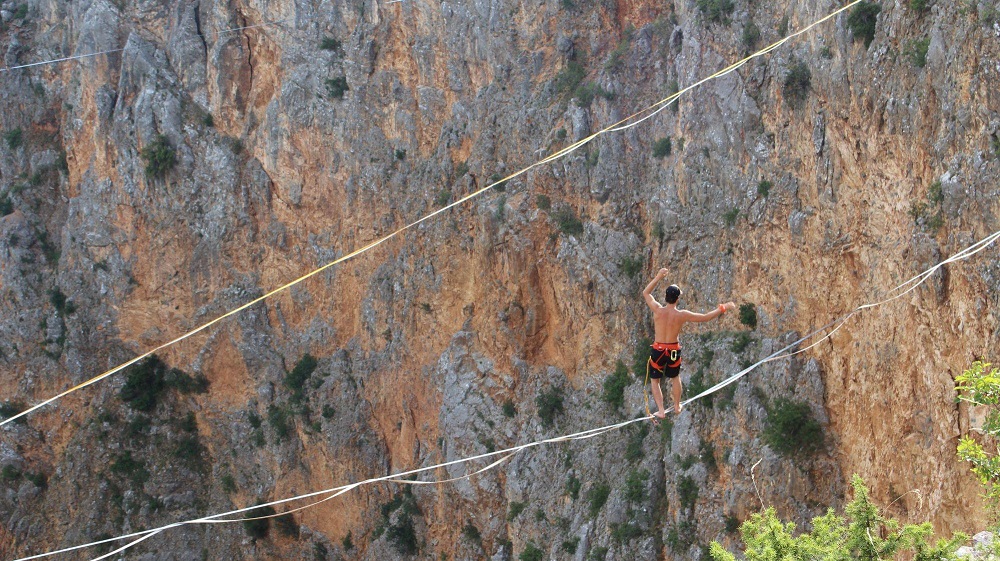 Croatian Moutain Rescue Service (HGSS) expedition with a large dose of courage and much needed good physical condition, made of young men discovered the temperature of the lake to be 25°C,Austrian tourists called them, daredevils, slacklined across the Red Lake this June 2017. In May, Frenchman Frederic Swierczynski was the first person ever to dive to the bottom of the Red Lake in Imotski.He made several expeditions in 2017.
During the summer, there are special occasions when bathing in the Red Lake is possible too. 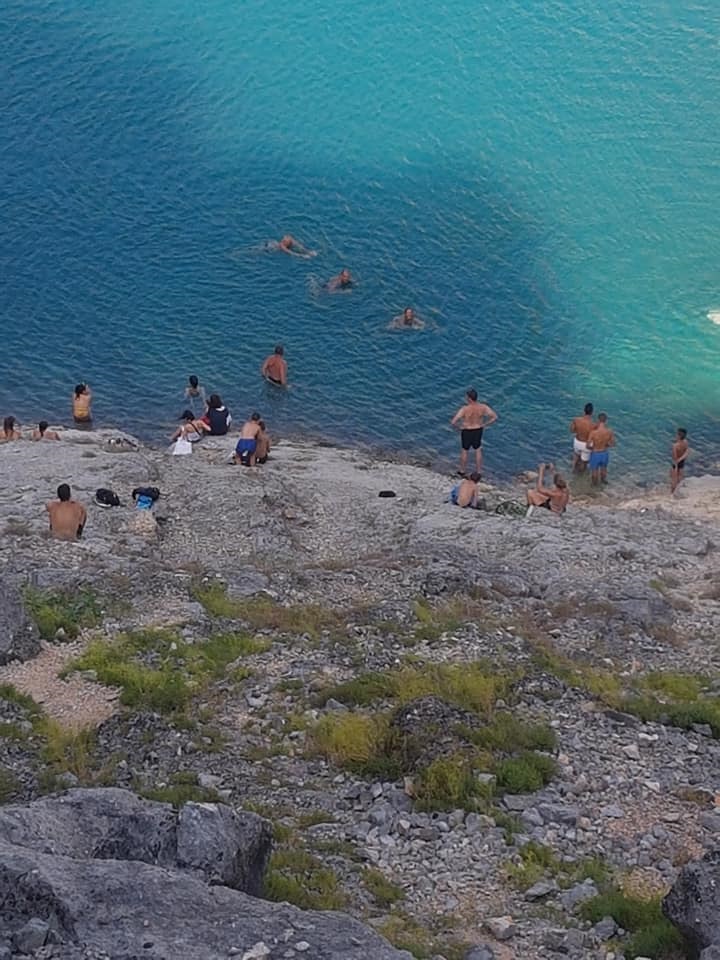 BLUE LAKE
Blue Lake is one of the most beautiful karst lakes in Croatia while its water level fluctuates considerably during the year, so often, the lake completely dries. During the summer months, usually there is enough water for swimming, and it is not uncommon to even play various water sports. Special concern is being led about water quality and tidiness. You can try stand up paddling which is a fun and relaxing way to play on the water. This activity does not ask for age or skills, nothing but your good mood. 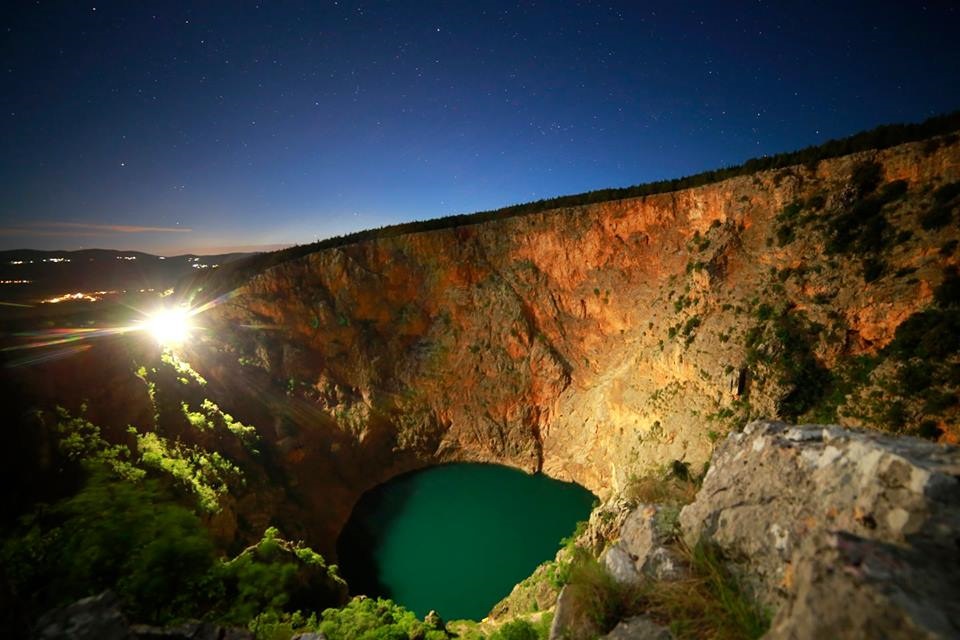 it lies in a deep sinkhole, probably formed by a collapse of an underground cave. The depth from the upper rim is about 200 meters and the dimensions of the lake are 800 per 500 meters. The water depth varies with season, as in winter and spring it can reach the southern rim and during the hot summer days it may completely disappear. When the lake completely dries out, people from the town make an improvised football field and play. The lake is also a popular hiking destination. In the early 20th century, a stone trail descending to the lake was built, so people can easily get down during the summer days, sunbath and swim. The nearby cliffs are perfect as a diving platform, some of which more than 40 meters high. 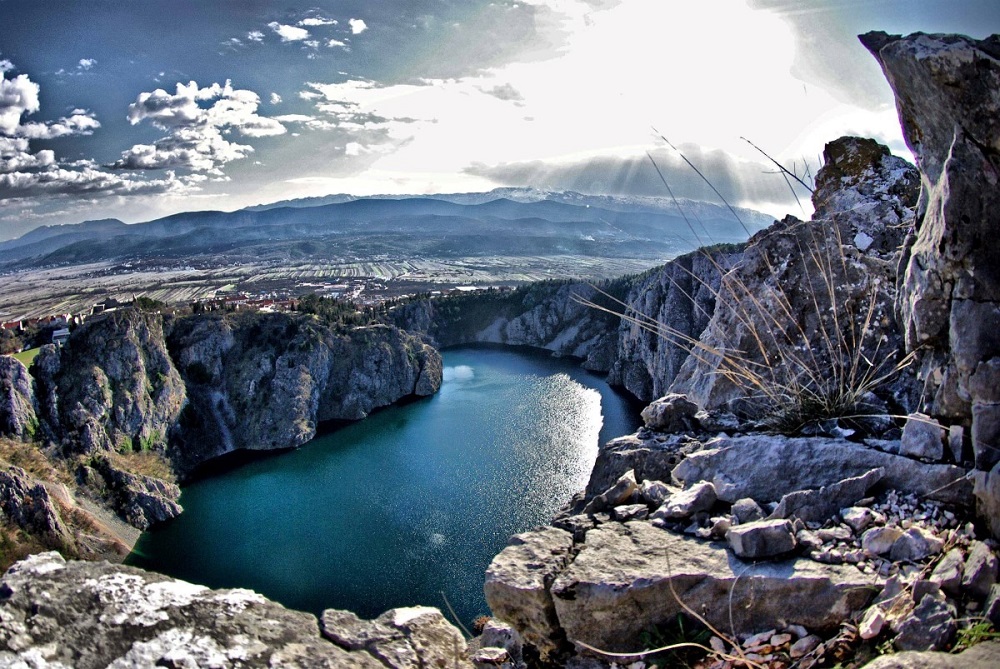 There are more legends connected to the origin of the lakes in Imotski that are passed down from generation to generation, And many tales of fairies and elves.
The legend says, that in Imotski, in what is now the Red Lake, where located Gavan courts owned by the local rich man, which, in the process of cataclysmic event, where swallowed by the earth and water. – He had Gavanica wife, children and a large number of servants. Gavan an Gavanica were not only known for thei wealth, but also by arrogance.
Once upon a time , an angel came to his palace, disguised as a poor man, looking for some food.The door was opened by Gavanica, his wife, and she did not want to give him nor food or water. The angel asked Gavanica if she was afraid of God, to which she responded that she does not fear anyone as long as her Gavan is alive. All the wealth has rumbled, thunder began, lightning flashed, and entire Gavan property, Gavan, Gavanica and their children have sunk into the ground that opened. The punishment of arrogance created beautiful lakes. 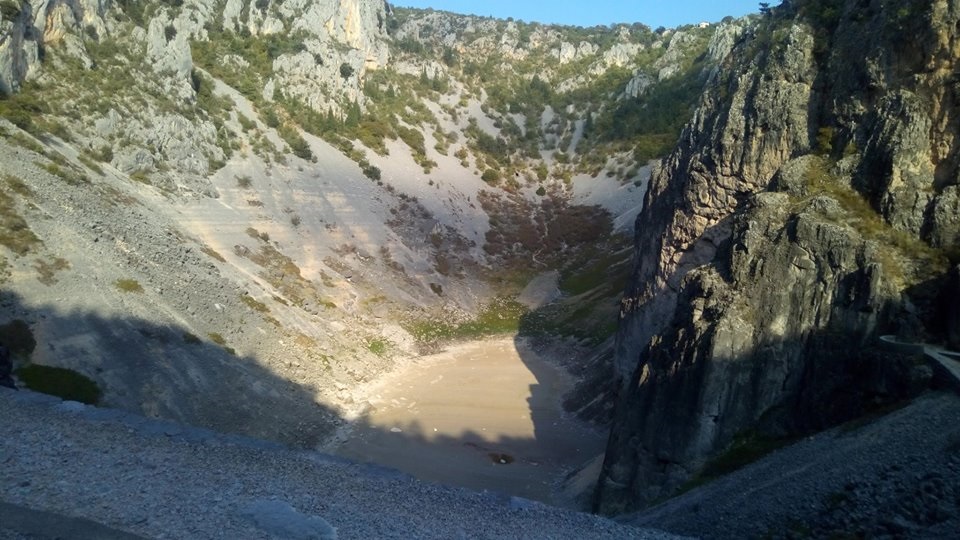 To this day, cries of the Gavan and Gavanica can be heard from the depths of the lake on whose farm the Red Lake in Imotski was created.The oldest inhabitants of Imotski say that when the weather is good, the sky is clear, the water is calm and when there is no other people around, even today in the Red Lake, you can see the remains of the old castle walls of Gavan! Good message for the punishment of arrogance ? 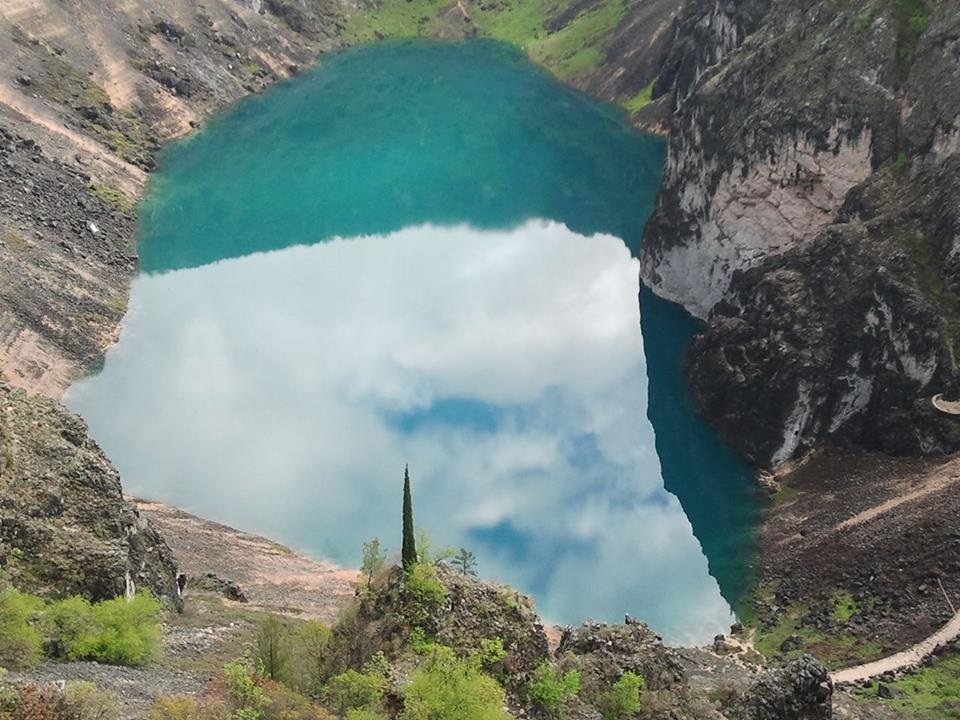 A great poet Tin Ujevic recognized a beuty of Imotski and was written about it in his poem „A Pilgrimage through Zagora“. but legends of lakes also has one “fable” of which even bigger Hollywood productions would not be ashamed, if they decided to adapt it into a movie or a series.